MAHWAH, NJ — The owner of a home that a fire ripped through Saturday was injured during the blaze, police reported.

The home is owned by Darryl and Jackie Secor, the owners of Secor Farm. The house is located near the farm on Airmont Avenue.

Darryl Secor found the fire, informed authorities about it and tried it extinguish it, said Mahwah Police Chief James Batelli. Secor suffered minor burns to his face and hands and was treated at the scene.

All five Mahwah fire companies responded to the fire, along with companies from Ramsey, Wyckoff and Tallman, Batelli said.

The fire was extinguished in about a half-hour, Batelli said, but firefighters remained on scene for hours extinguishing hot spots.

Batelli said an initial investigation showed the fire accidentally started on an overhang connected to the house before it spread through the entire structure, Batelli said. 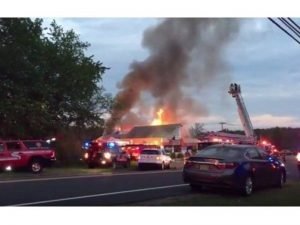