The Tallman Volunteer Fire Department is situated on Route 59 in Tallman, NY. The fire district is located in the Town of Ramapo, and we serve Airmont, Montebello, Portions of Monsey, Suffern and Wesley Hills NY.

Our community is a combination of residential and light industry as well as sections of the New York State Thruway.

Our mission is to protect life and property utilizing highly trained volunteers with expertise in firefighting, rescue and accident extrication.

Below is a brief history of the Tallman Volunteer Fire Department:

The Tallman Volunteer Fire Department was founded in 1909. When the department was founded- one of the first orders of business was to figure out how to let the firemen know there was a fire! So a committee went to the local church as asked if they could use the church bell to sound the alarm. The church agreed- and the signal were 10 taps of the bell to notify all there was a fire- then 2 taps for north, 3 taps for east, 4 taps for west and 5 taps for south.

In January of 1910, while the building was still a dream, a meeting was held with the Kamhana Fire Apparatus Company. A motion was passed for the Tallman Volunteer Fire Department to purchase its first fire engine for $1000.

When the truck was delivered later in 1910- a tradition started that continues to this day- all the firemen had to constantly learn about their apparatus, practice on it, and keep it constantly clean!

In 1911 the department received its first invitation to attend a parade- the invitation came from the Spring Valley Hook and Ladder Company.

During this time the fire truck was garaged at the Grange. In 1912 it was decided that the building of the fire house was finally necessary- and construction would begin soon after.

From that point forward- the department continued to get more volunteers- who fought in 2 world wars, the Korean war, the Vietnam war, lived thru the depression- and as all of this was occurring- more and more people were moving to the Tallman fire district.

The building was added to - to house more engines, the district was rapidly changing from farming to residential- and the needs and skills of the firemen were constantly changing.

Their 71 active firefighters and junior firefighters go thru extensive training every week to ensure that they are up to date on the latest firefighting and rescue techniques. They devote thousands of hours of service every year to the community on a totally voluntary basis. 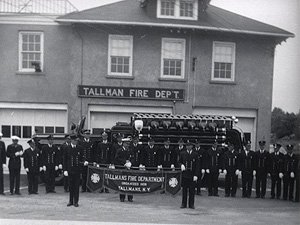 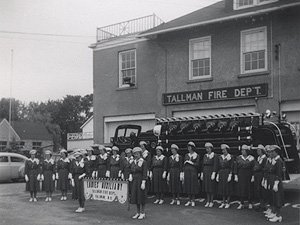 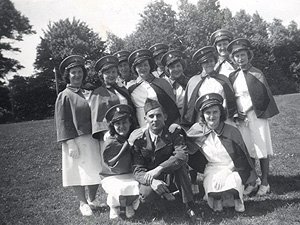 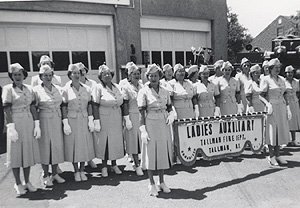 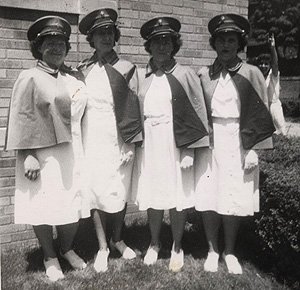