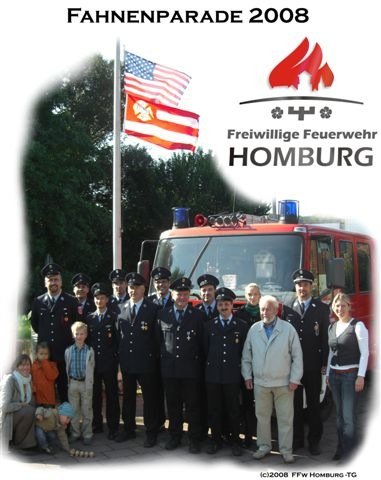 After 9/11, a volunteer fire department from a small Bavarian village in Germany, Homburg am Main, collected funds for the families of the nine firemen of Ladder 25 and Division 3, FDNY who died at the World Trade Center. Their representatives brought the donation over to America in December of 2001. The Tallman Fire Department hosted the representatives of the German fire company here in Tallman, and while visiting the Tallman Firehouse, the Assistant Chief of the Homburg department suggested a partnership or twinning arrangement, and invited the members of the Tallman Fire Department to be their guests in their Village.

Six members of the Tallman Fire Department visited Homburg in July of 2002 as the guests of the Homburg Volunteer Fire Department. The Homburg firefighters made their homes available for the lodging of the Tallman firefighters, and the Tallman firemen marched in two parades in conjunction with the Village's annual wine festival. Tours were scheduled every day during the week the Tallman firefighters were in Germany. These included a visit to a large volunteer fire department in the next village, Marktheidenfeld, visits to historic sites in the City of Wuerzburg and a trip to Munich, the Bavarian capital. The highlights of that trip included a tour of the main fire station of that City's fire department, which consists of both paid and volunteer companies, their Fire Department museum, and a guided tour of the city by bus, ending at the famous Munich Hofbrauhaus. An emotional aspect of that visit was the presentation of the flag of the Fire Department of New York to the Homburg Fire Department. The flag was donated by Deputy Chief Thomas Galvin, Commander of the Third Division, FDNY, in recognition of the donation made by the Homburgers, and which was carried over by the Tallman delegation. In a letter that Chief Galvin sent over with the flag, he wrote, "Please fly the flag on the 11th of September as a remembrance of our fallen brothers".

The Homburg Fire Department, has, in fact, held a formal flag raising service each year on the anniversary of 9/11. Tallman then invited the Homburg firefighters for a reciprocal visit in August of 2003. The guests from Homburg were taken sightseeing in New York City on three separate days. They were taken on a harbor tour, a visit to the World Trade Center site and to the Museum of the Fire Department of New York. They visited various fire companies, including Ladder 40 and Engine 37 in Harlem, and Ladder 25 and Division 3 on the upper west side, as well as as the Fire Academy on Randall's Island. On one of their visits to the City they were taken to the usual tourist attractions such as Times Square, Rockefeller Center and the Empire State Building. They were also taken on a tour of West Point. The Homburg firefighters also participated in a flashover drill at the Rockland County Fire Training Center. Tallman members visited Homburg a second time in 2005, and the Homburgers visitedTallman again in 2007. The partnership enables both departments to exchange firematic knowledge and experiences as well as to provide a cultural interchange. The Homburg Fire Department was established in 1874. Thier current membership includes 78 active members including their youth members, 21 honorary members, and 50 other members. Their firehouse was built in 1991 and they have three pieces of apparatus, built in 1964, 1995 and 1997, respectively